There's a shot in the new Blade Runner 2049 trailer that is very reminiscent of a similar shot in the 1990 movie HARDWARE, so we thought we'd include some clips as a little side-bar to the aforementioned, heavily-anticipated Harrison Ford sequel. 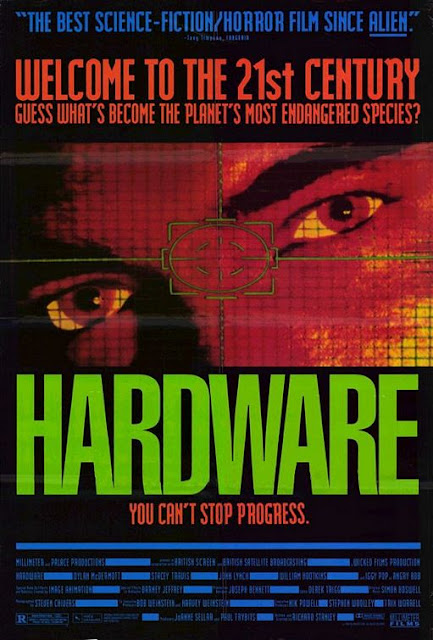 
For a short while at the beginning of the 90's, director Richard Stanley was the up-and-coming indie auteur to watch. Coming from a background of music videos and documentaries, Stanley was able to bring a widescreen vision to HARDWARE, a small-scale, low-budget sci-fi flick, that references both Terminator and Evil Dead. The film was a success and garnered a cult following, and was followed up by the equally good Dust Devil, a slow-burning horror film shot on location in Namibia ( Stanley was born in South Africa, and so has an affinity for the African continent ). However, subsequent career missteps meant that he has maintained a relatively low profile compared to the indie kids who came after him ( notably Quentin Tarantino and Robert Rodriguez ), and so he failed to capitalise on the huge mainstream appetite for original indie film-making that came to define 90s cult cinema.

Hardware was unavailable on DVD until 2009, when it was released as a special edition.

FAN CUT OF PUBLIC IMAGE LIMITED'S 'THE ORDER OF DEATH'
( FROM THE SOUNDTRACK ):