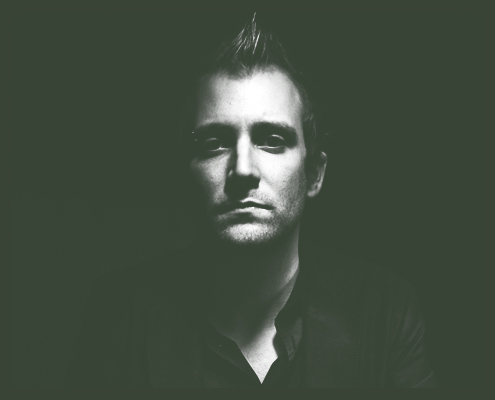 Thomas Betrisey has been a regular feature in Future-Rocker ever since we discovered his former band Sybreed's crushing and anthemic masterpiece 'Antares'. Since that band expired, he has been busy producing other bands, running a studio in Geneva, and performing onstage with veteran Industrial Black Metal band Samael. We caught up with Thomas during Covid-19 lockdown to find out what he was up to.

FUTURE-ROCKER: Thomas, what are you doing during lockdown? Chilling, or working on new music? Any new tracks we can include in the blog?

THOMAS ‘DROP’ BETRISEY: I've been writing lot of music, I've started a new progressive tech house project called Messergeist, and released the Confined EP on May 1st on every streaming platform as well as Bandcamp. And Messergeist is only electronic, no guitar there..!

What would be your dream movie, franchise or remake, to score?

The first title that comes to mind would be doing an electronic/dub remake of Monkey Island's soundtrack haha, my favorite game of all time. Seriously, I really think all the movies or games that I like have a perfect soundtrack, and I'd prefer working on something new. Anyway, scoring a game or a movie is definitely something I'm looking for, we will see what happen in the future.

In a previous interview we talked about your fave metal albums. What are your favourite or most influential electronic albums or soundtrack albums?

Five albums that immediately come to mind, and not in a particular order:

I absolutely agree with you about Man of Steel. Hans Zimmer is less bombastic than John Williams, but more atmospheric. That was the first film soundtrack I’d bought in ages, and I also bundled it with Batman v Superman as well. Some great cuts on there, too.
Incidentally, the Messergeist track Gloomwash has some nice spooky female vocals on, and it reminds me of a video that blew my mind yesterday - Triptykon doing Celtic Frost’s Rex Irae from Into The Pandemonium...they did it absolutely spot-on. Have you heard it?

In Google translate, Messergeist comes out as 'Knife Spirit'. Or I'm assuming it's more like 'Knife Ghost'... is that closer? What's the thinking behind that?

I was browsing some names for that project, looking for some two-words compression word, when GhostKnife popped out my mind, sounded really sharp. Then, one night, a friend just translated that in German, sounded really cool and very "techno" haha. Moreover, it wasn't existing anywhere on Internet, so the choice was made. No special meaning here.

So what else have you been working on?

I've also worked on some Obsydians, one song is at the mixing stage, and the other one is getting vocals on it as we speak. 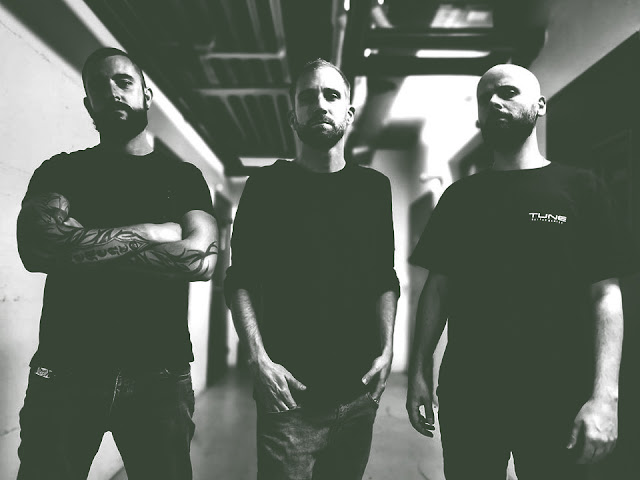 ABOVE: Kevin, Thomas and Ales of OBSYDIANS

Great, some new Obsydians music to look forward to, it's been a while. Where are you living right now, are they strict or loose with the lockdown?

I'm in Switzerland. We had a half lock down, people were allowed to go outside, respecting social distances as well as not groups of more than 5 people. Now they are slowly releasing the people, everything should get back to "normal" in one week.

Actually not much different things, I will continue writing music and recording bands at the studio. I really hope to be able to make some concerts as soon as possible, I miss that a lot. And probably spend some money in my friend's pub as soon as it opens.

Are you still with Samael or are your contracted duties with them now finished?

'Guitar duties'... that's more like it! And what about the possibility of you taking over the producer’s chair too?

Haha, Xy is the mastermind! Don't know if I'll produce, but I hope so.

SYBREED / OBSYDIANS / SHADOW DOMAIN  are some of the most-read articles on Future-Rocker. There's a great picture of you and ( ex-Sybreed vocalist ) Benjamin Nominet from last summer, on Facebook. I know this is a totally obvious thing to ask, but the fans will kill me if I don't: You are clearly on friendly terms with each other... did you chat about doing a music project or perhaps even a proper Sybreed reunion?

Below: For one night only!
Thomas & Benjamin reunite half of Sybreed...for a cold beer!
Photographed in June 2019. 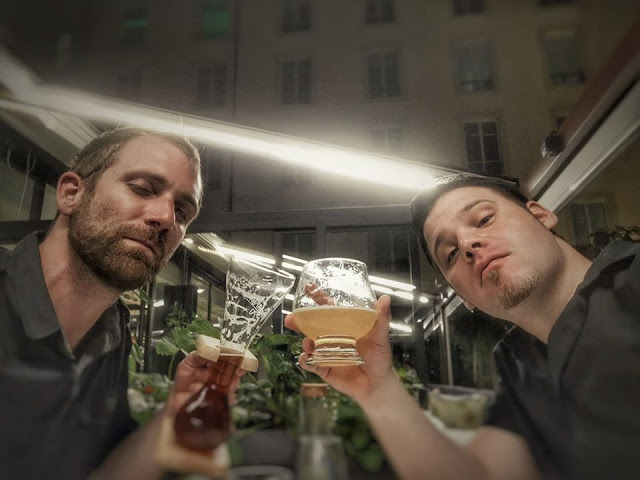 Yes, we are on good terms, we are doing a few music things together but nothing Sybreed-related for now. I've recorded him last week as a guest on the new The Erkonauts record that I'm producing right now, and it reminded me of some great memories. I will also work on his new project, I won't say much for now, won't reveal his new plans yet, keep looking, haha.

Thanks Thomas, good luck with the new projects, and stay safe!

FOR EXCELLENT MUSIC AND STUDIO UPDATES, THOMAS ON FACEBOOK

WANT THOMAS TO TAKE YOUR BAND TO THE NEXT LEVEL? LINK TO DOWNTONE STUDIO
Posted by HAL 9000 at 10:00