OBSYDIANS IS THE NEW SYBREED: INTERVIEW WITH THOMAS 'DROP' BETRISEY

''I think 'Antares' is my fave too. I want to go more that way for OBSYDIANS.''

A rather nice but somewhat bittersweet aspect to the internet culture, is that you can unwittingly become a fan of a band years after they've stopped operating. So, while there are undoubtedly people out there still writing fan letters to Kurt Cobain and Jim Morrison, you also get people like us at Future-Rocker getting massively into bands only to find, after a few Googles, that they no longer exist.

So it is with the monumental SYBREED. Formed in Switzerland in 2003 by guitarist and producer Thomas 'Drop' Betrisey, they were a virtuoso industrial metal band whose sound encapsulated tight-as-a-gnat's-arse metalcore riffage and the best use of a melodic/harsh vocal style since Ihsahn of Black Metal legends Emperor ( whom the singer Benjamin sometimes resembled vocally ).

Sybreed's four albums each built upon and refined their big, layered sound, but for us at Future-Rocker, it is the glorious 'Antares' ( the second album ) that is a true rock classic. Crushing industrial grooves, and screamed vocals contrasted with soaring, stadium-shagging choruses, cloaked in an otherworldly cosmic atmosphere, it is a truly uplifting sonic experience. 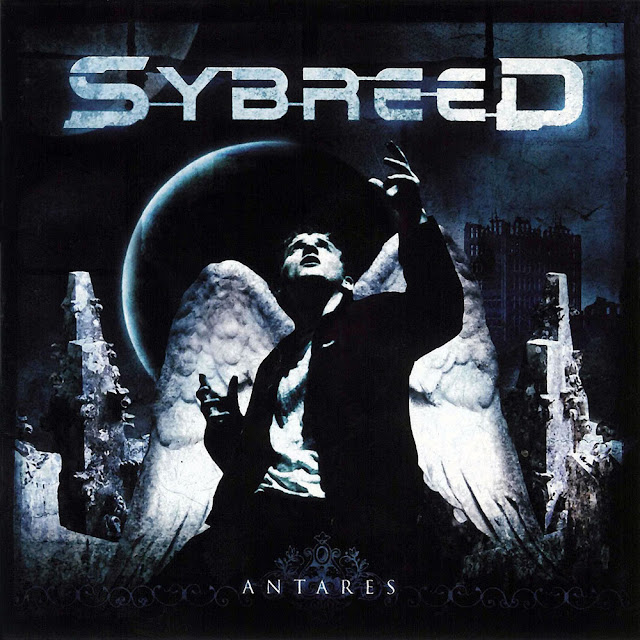 We discovered 'Antares' thanks to French metal singer Rachel Aspe's heroic cover version of the album's opening track, 'Emma-O', on France Has Got Talent. We ask Thomas what it was like to see Sybreed gather a new following after the band sadly imploded.

FUTURE-ROCKER: First of all, we have to ask – what did you think of Rachel Aspe’s performance on France Has Got Talent?

I think it was pretty cool to see this on local television. I know a lot of people have been impressed by her performance. Also it's great to hear Sybreed's music on prime-time TV, and that would have never happened without this kind of performance. I would have liked it more if she were singing the chorus with clean vocals, but it was about a woman with a male voice so it would have been less impressive for a certain type of person.

Did you know that she was going to be doing it?

Yes. She wrote me a few months before, to ask if I could provide an instrumental version of Emma-0. I had to reopen the old Antares sessions and make a really quick mix before sending it over, but I think that was worth the time. And also I'm happy for her, I think this has contributed to her being hired by the French band ETHS.

How do you feel about it getting your music so much attention, given that Sybreed is no longer functioning?

It's always great to have your music broadcasted and liked by people, even after the band's death ... Anyway, I would prefer having less attention, and Sybreed still on air, but life's what it is, the balance between good and bad needs to be in the middle. Really great things happened since the split, things that would have not been the same with Sybreed alive.

Sybreed were a fantastic band, whose stature has probably grown since you split.

For those that don’t know, why did you split up?

The singer Benjamin decided to quit the band right before a huge European tour with Soilwork. He had some personal problems, and he had no other choice. I decided to not continue the band without him. I think the singer is more than 50% of the bands identity. I prefer to start something new, it's called Obsydians, it will be Sybreed-like music, with other singers.

Explain how you started out. How did you get to be both a great musician as well as producer?

My father is a musician, so I was kinda born with a guitar in my hands. I remember he has a Casio guitar that was making helicopter noises, a good thing to make your little boy start playing guitar, haha! I started writing songs at ten years old, recording with a tape machine he also bought for me. So I assume if people like my music, they have to thank him first.
I started my first band, Rain, in 1997, releasing a demo, three albums and two EP's until 2003. During these years the line up evolved, becoming Sybreed's line up. We decided to change name in 2004 and recorded our first album 'Slave Design', then 'Antares', 'The Pulse of Awakening', and finally, 'God is an Automaton' in 2012.
Besides that, I started producing bands since 2003, the first studio was called The Drone Studio, in my room. It all started when Rain's producer had to find a better job and he told me to finish the last EP on my own. And since 2011, I have Downtone Studio with two friends, a much bigger one this time. I'm really busy on it.

What’s the music scene like in Switzerland? - Along with Samael, Apollyon Sun ( Tom Gabriel's first band after Celtic Frost broke up ), and Young Gods, it’s seems that industrial rock and metal is quite prominent there.

I'm not really aware of the scene in Switzerland but I know we have a lot of great bands. Samael was my favorite band when I was a teenager, they changed a lot my way of making music, they were the major influence of my first band Rain.
I record a lot of bands in my studio Downtone Studio in Geneva, some good industrial metal from Switzerland, bands like Clawerfield and Nakaruga, that all the Sybreed fans will like for sure, check them out.
Also, my friends Promethee from Geneva are becoming big right now, I'm happy 'cause they really deserve it!

Are you also a permanent member of Samael, or was filling in on bass just a temporary thing?

Yes, I'm a permanent member now, I exchanged my guitar with a bass and let's go. I'm really happy about it, as I told you it was my favorite band some years ago, so it's like a child's dream coming true.

Below: Thomas ( left ) with SAMAEL. 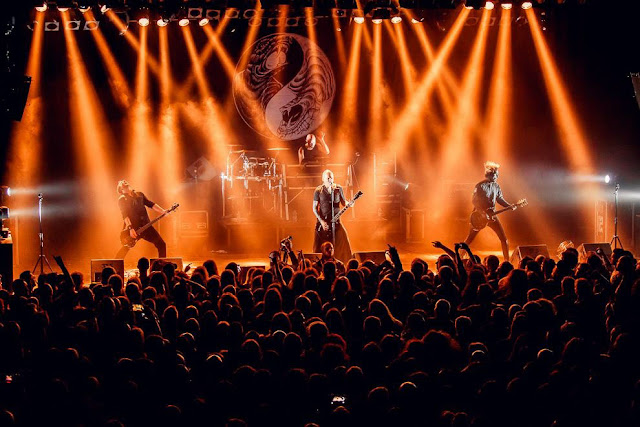 What are your influences?

I'm influenced by music, all kinds of music, from metal to electronic, I also really like rock music. I prefer melodic things. When I go on tour or on holiday, the traditional music of the country I'm in can provide some ideas too. I like to jam, but usually I have a melody or a riff in my mind before starting to record it. Everything needs to be done really quickly, without thinking a lot. I like honest things, the ideas of the moment. All Sybreed songs were composed really fast. Sometimes I don't even remember the song the day after, and that's good because I can be the external ear myself, haha!

Without wanting to limit what you do by labelling it...how do you describe your music?

Metal with electronics, cinematic influences and athletic riffs - ( producer ) Rhys Fulber found this last description, I think it's funny and true at the same time. I like a lot of layers, the music needs to be as wide as possible.

Give us your Top 5 list of classic albums, any genres.

This is not easy to chose, so I will write the first 5 that comes into my head, but you have to know there are around 100 more to add to that list :

What are you listening to at the moment?

At this precise moment I'm under a palm tree in Mexico, listening to Soilwork's "The Ride Majestic" which is one of their best records to date, I really like it.
Ghost's "Meliora". For now it's my album of the year, so great, but a bit short. I love this band since the first album.
The new Soulsavers album ( Dave Gahan from Depeche Mode's side project ). I like the German electro producer Paul Kalkbrenner, he just released his new album "7" and I really like the vibe.
Leprous "The Congregation" what a great surprise, finally something fresh in metal.
Otherwise I like almost everything Ulver does, also the British band White Lies and also Foals, they both have they own style and it's hard to beat their melodies. And the list goes on and on.

What famous artists would you like to produce, and why?

Sevendust! I really liked their albums "Animosity" and "Seasons", and I think it went down since then, the albums need a wider sound and better arrangements!
Depeche Mode, that would be THE dream, and then I will be allowed to die in peace hahaha.

By the way, we're reviewing the Celldweller 'End of an Empire' box-set in this issue. We notice that you've done some great Celldweller remixes in the past. Have you actually met Klayton, or was it all done over the internet?

Thanks !! Actually I never met him, I never even got in touch with him at all, hahaha. The remix kits were downloadable on his website. I know, I just exploded some of the magic, but that's what it is!

( Just thinking out loud, how great would it be to hear a Drop-produced Samael album, or maybe even a remix album...that would be too good to be true! ).
Finally, bringing us fully up-to-date, we heard that your new band, OBSYDIANS, is apparently going to release an album soon. True?

Mmm, I would have loved to say yes, but we only have a few riffs, and my schedule of the past two years has been really tight, and we didn't have the time to write properly. But I'm planning to start it before the end of the 2015. Anyway, don't expect anything before fall of 2016.

Below: An early selfie of OBSYDIANS ( l-r Thomas, Ales & Kevin ). 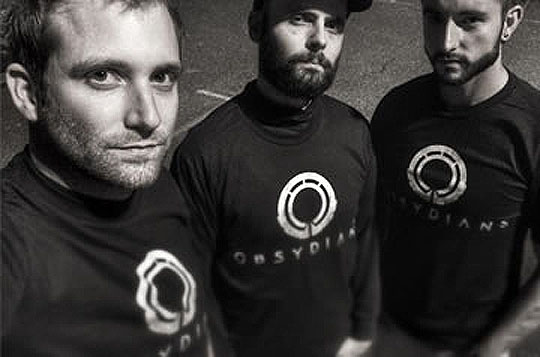 When the band debuts, what can the fans expect from your new music?

Sybreed! And the concept is to have different singers on all the songs, a really diverse album, with a lot of different influences. I already have some ideas written down in my phone, so now we just need to start writing songs for the singers we'd like to be on board.

Your second album 'Antares' was / is an all-time classic.

Thanks a bunch, man. I think 'Antares' is my fave too. I want to go more on that way for Obsydians.

Are you on a label yet?

No label for now. And I think we'll start releasing songs on BandCamp, then we'll see.

Any tours lined up?

Nothing for now, Samael's schedule is really busy too, and I don't want it to collide, 'cause I know Obsydians will have to cancel shows. And with a different singer in each song, that would be hard to tour. But we want to make some shows for sure, so this will happen before the world ends - I need to be quick, I think!
Also, I forgot to mention that Ales and Kevin from Sybreed, respectively bassist and drummer are permanent members of Obsydians. So when I say Sybreed as the key-word, I know I'm right.

Your next live appearance with Samael will be on the '70,000 Tons of Metal' tour in a couple of weeks. Sounds like a great excuse for a paid holiday, with a who's-who of mostly European metal. Your thoughts?

I'm looking forward to it! I know some people that already did this experience, as a band or as a fan, both sides told me it's something extraordinary. Samael already did the trip a few years ago. So yeah, I'm really excited about it. Metalheads in Jamaica, what an interesting concept!

Fantastic, thanks for bringing us up-to-date, Thomas!


CLICK HERE IF YOU HAVEN'T YET HEARD OUR CLASSIC SYBREED TRACK 'EGO BYPASS GENERATOR'
Posted by HAL 9000 at 14:36