SPECTACULAR NEW SHORT FROM THE DIRECTOR OF 'DISTRICT 9': RAKKA

We here at Future-Rocker think South African film director, Neill Blomkamp, can do no wrong. District 9, Elysium, Chappie, are all masterpieces of speculative cinema. ( Yes, even Chappie, which we consider to be way better than Ex_Machina, another A.I.-themed film that came out the same year, and which Chappie was unfavourably compared to ). We feel that nobody but Blomkamp has been able to consistently capture a science fiction landscape of a future Third World that is dirty, lived-in, and disturbingly contemporaneous. And let's face it, if you go purely by Hollywood blockbusters, it would be easy to assume that only America owns the future. Refreshingly, Blomkamp is adept at visualizing a worst case scenario for the entire Planet Earth. 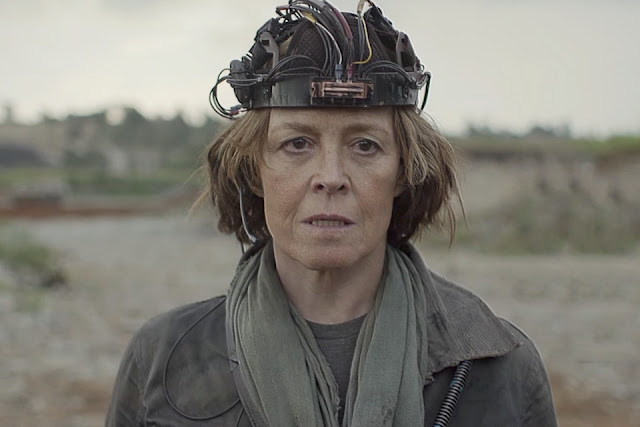 20-minute Alien invasion thriller Rakka ( starring Sigourney Weaver, above ) is the first 'volume' from his new Vancouver-based Oats Studios. A year or two back, we were pretty bummed that Neill's proposed sequel to Aliens ( in which Hicks and Newt survive ), got put on the back-burner after Ridley Scott's success with The Martian. But with Scott following his polarising Prometheus with the anti-climactic performance of Alien: Covenant, we wouldn't be surprised if he will soon be moving on, and that studio heads are reconsidering Blomkamp taking the reigns. However, after seeing Rakka, where again Blomkamp uncannily blends CGI with the real world, as he did with the low-budget breakout hit District 9, do we actually want him back on the big studio treadmill? Judge for yourself...

Oats is a loose collective of film-making experts that features all the necessary talent to create a movie, under one roof. And - uniquely - it's crowdfunded, where only the most popular ideas will be the ones to make it into full-blown production.

Check out the studio, here:

WONDER WOMAN MOVIE PREDICTION : 5 REASONS WHY WARNERS HAVE GOT IT RIGHT THIS TIME

So, this week is the moment of truth for DC/Warners. Not simply because Wonder Woman is seventy-five this year ( yes, that's how long it takes to get a female pop-culture icon in front of movie-going audiences ). No, for good or ill, this movie now comes loaded-down not only with expectation, but the kind of industry baggage that no-one at Warner Brothers would have remotely predicted even a year ago. The first DC Extended Universe movie, Man of Steel, was considered downbeat and dreary ( although it did have its supporters ). Batman V Superman was more of the same, with added incoherence ( both were directed by flashy action auteur, Zack Snyder ). Suicide Squad ( directed by David Ayer ) was simply appalling - a heist movie with no heist. It is therefore appropriate that in these times of gender politics, internet misogyny and glass ceilings, that an industry dominated by men, adapting a fictional medium traditionally associated with adolescent males, is about to get schooled by a female-fronted action movie directed by a woman. ( Cont'd below ).

Below: One of the many examples of the movie's inspired - and inspirational - promo posters. 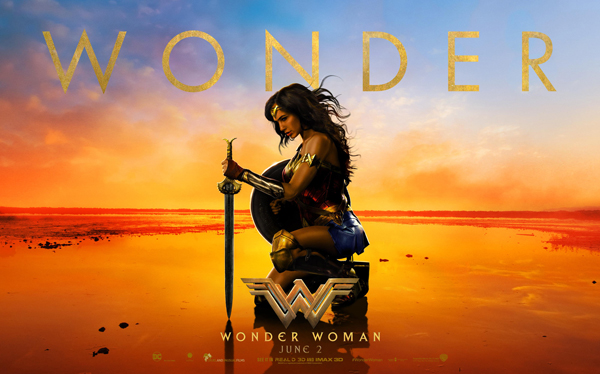 There is no doubt that in the future, books will be written on the lamentable attempt by Warners to catch up with their arch rivals, Marvel Studios, in adapting their roster of celebrated comic-book properties. I will state upfront that I have not seen any preview screenings of the film, and stopped following any online reviews of Wonder Woman several weeks before its release. However, in this article I contend that the signs were there all along, that Wonder Woman would buck the trend, and not only get DC's troubled cinematic universe stabilised, but be the first female-led action movie to succeed in a meaningful way at the box office. If I'm wrong, I'll publish a review and say so!

Will Wonder Woman unite critics and fans alike? Here are five reasons why they just might pull it off.


1 ) THE AD CAMPAIGN. All the Wonder Woman trailers have been great, because, unlike the example of Batman V Superman, this is a case of Warners heroically holding their nerve, and not giving us the entire movie in soundbite form, a year in advance. Each ad has so far embellished very slightly what we have already seen in the preceding ad, which definitely leaves us wanting to go and see the actual movie. Whereas in the case of Batman V Superman, pretty much every single scene was shown in trailer form, leaving the viewers with no surprises whatsoever, because they had used what they saw online to extrapolate the bits that weren't shown. When a movie costs two hundred million bucks, for there to be no sense of surprise for people who've paid good money to see it in the cinema, is unforgivable. For one thing, it'll simply encourage people to say, 'I'll get the Blu-Ray or wait til it's on Amazon'. About a month ago ( April 2017 ), fans were grumbling that Wonder Woman's lack of saturation-advertising indicated that DC were trying to bury the film ( in other words, that it, too, was deemed a dud ). In actuality, the campaign has been paced so that it is crescendo-ing now, a week before the film is released. Plus, as you can see here, even the posters exude the right amount of confidence, positivity, and forward-momentum. 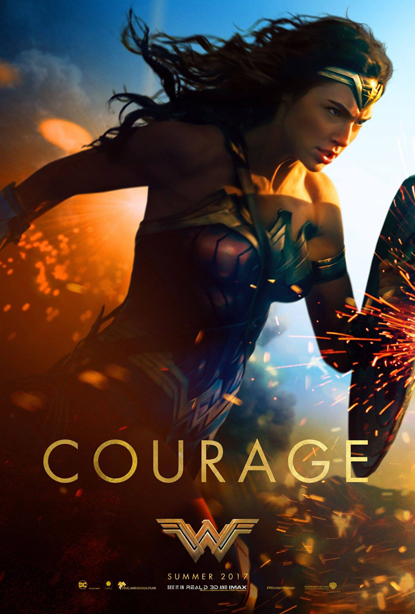 2 ) WONDER WOMAN BEING SET DURING WORLD WAR ONE. This is a neat tweak of her actual origin ( her first appearance in comic-books was during World War Two, and Wonder Woman, like Captain America, has traditionally been seen as a WWII character ). It's neat in that the time-shift allows it to firstly avoid any cinematic comparison to Marvel's 'First Avenger', but secondly to retain that sense of playfulness and naivety that the story and the character ( as the archetypal woman-out-of-time ) requires. This is important, because as Future Rocker mentioned in our Wonder Woman movie article of October 2013, Marvel's main stable of heroes ( Spiderman, The Fantastic Four, The Silver Surfer, etc. ) were born during the Sixties counter-culture, and therefore had built-in snarky, anti-establishment sensibilities that today's audiences will more readily understand. Anything created before then starts to look and sound anachronistic - like a costume drama, in other words. So, while it may initially be thought of as a disadvantage to be set in the early 20th Century, good writing and period detail will force the production to bring an interesting and fun perspective. Wonder Woman / Diana is from ancient Greece, and will suddenly find herself in a time where men were forced to face technologically-advanced, mechanised war machines on the battlefield. Interesting parallels can be drawn.

3 ) PATTY JENKINS IS THE DIRECTOR. This in itself is heroic, and shows true balls on the part of the studio to take such a gamble. Jenkins is previously only known for one movie, that of the excellent Aileen Wuornos biopic, Monster ( 2003 ). To be handed a flagship, multi-million dollar movie, after making a small, arthouse piece fourteen years previously, is staggering. But, look at that movie. She coaxed an Oscar-winning and transformative performance out of Charlize Theron. Theron, at the time, had begun her ascent in Hollywood, and must have correctly calculated that playing against type would win her accolades that could take her to the next level, which it did ( the counter-intuitive notion being that a former model from South Africa, could play a mentally ill, prematurely-aged prostitute from Michigan did indeed help to get the film noticed ). So, getting a great performance from relative newcomer Gal Gadot ( also a former model ), seems like a good fit. Jenkins however, all but disappeared after her debut's success. Usually gaps in a female director's résumé means that time was taken to raise a family, or that the career-advancements traditionally afforded to successful male directors don't materialise for their female counterparts. Ultimately, it's Warners' gain because in interviews in 2016, Jenkins had remarked that Superman The Movie was a big influence on her Wonder Woman. This is another reason to feel confident that tonally this will be something audiences can finally warm to. 1977's Superman The Movie is still regarded as the great superhero movie, where the humour, pathos, and committed performances of its two leads ( Christopher Reeve and Margot Kidder ) still make it a fan favourite today, despite the now-dated FX. If Wonder Woman is a female counterpart of Superman The Movie, then it would be in stark contrast to the rather chilly themes and visuals of Zack Snyder's two preceding movies. 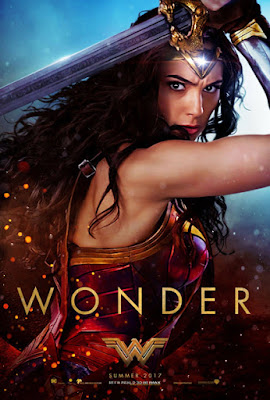 4 ) CONFIDENCE. This is not a production that exudes nervousness or insecurity. Since the film's principal shooting wrapped as far back as a year ago, Gal Gadot has admirably taken to her off-screen duties as film promoter, progressive commentator and women's advocate with an ambassadorial zeal. That, plus frequent fan-pleasing appearances alongside her Wonder Woman TV predecessor, the much-loved Lynda Carter, have enhanced the idea that an iconic mantle has been successfully passed on. Whenever the star and director appear together, there is no feeling that they are covering up a box office disaster. It has always been completely the opposite: Upbeat and anticipatory. Likewise, there have been no negative leaks from unnamed studio insiders, which also adds to the feeling that all is well. With the star's and director's social media output consistently on-message and conveying a sense of excited optimism, the signs are good.

5 ) Finally, GAL GADOT IS WONDER WOMAN. Some commentators have remarked on Gadot's untested acting abilities and her lack of experience. However, there is ample proof already that Gadot can carry a movie. Look at the visual clues in her seven minutes of screen time in Batman V Superman: Gadot's performance is note-perfect, from the playful Bond-esque intrigue of Lex's parties, to her recognition of Lois's grief as she hands-over Kal-El's body. It is widely held that she was the sole reason to see the movie, and her appearance in full battle armour during the finale, prompted grown men and women to cry with joyful relief into their long-empty popcorn buckets. Additionally, the trailers for the solo movie reveal Gadot to have great comic timing.

At the very least, if the movie is an uncomplicated action romp on a par with Captain America: First Avenger, it will have done its job, and given the studio a solid foundation to work with. It could also be the touchstone for a progressive new era of female-led action films, that can seriously generate box-office on a par with more traditional blockbusters.

And, finally, director Patty Jenkins will be vindicated for what must have been the movie-pitch of a lifetime - getting Diana Prince to the big screen - on her own, once and for all. 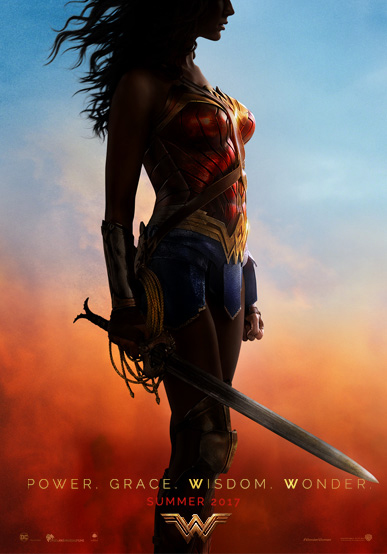