GUARDIANS OF THE GALAXY - REVIEW 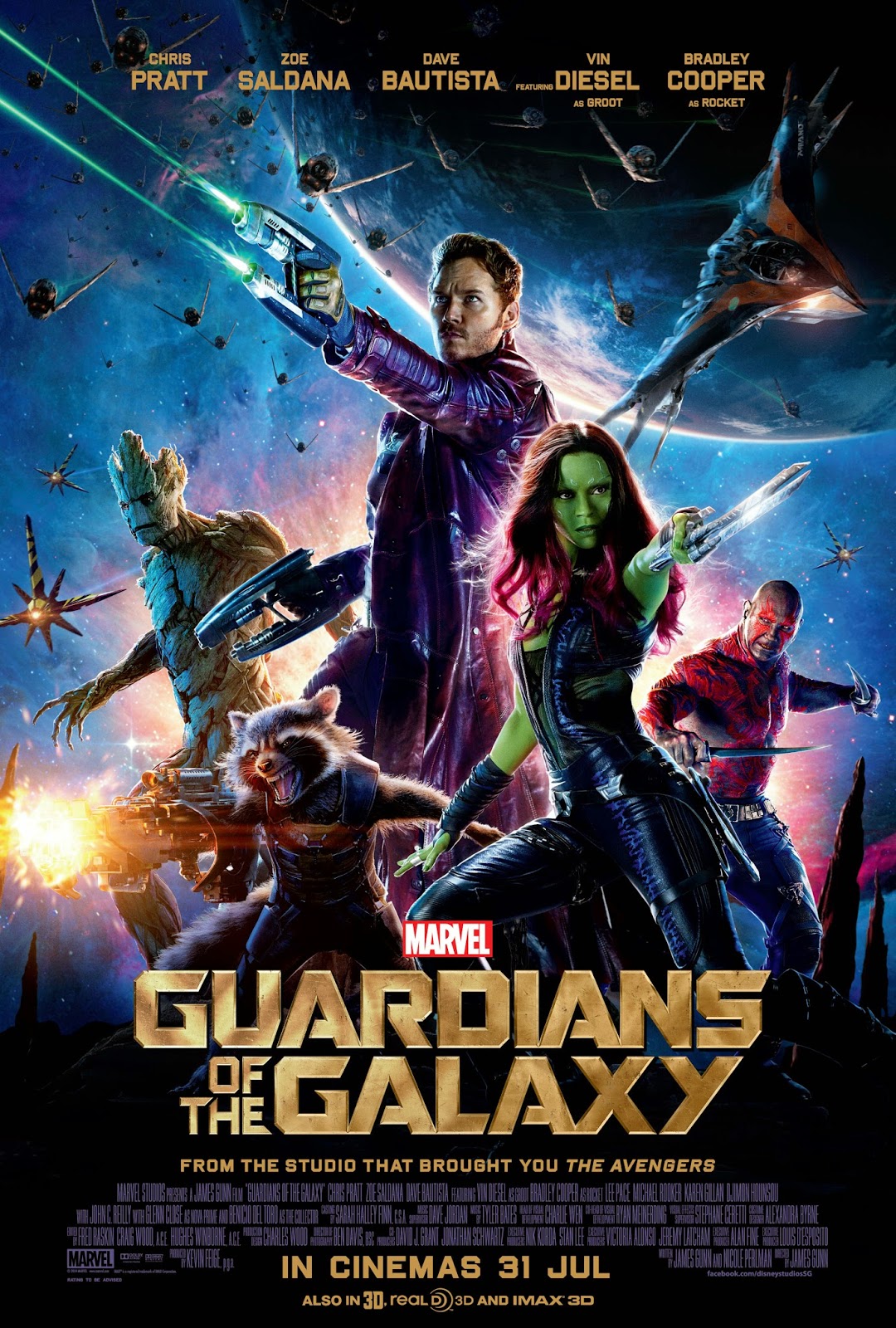 After much anticipation, thanks to the customary year-long publicity drip-feed ( and inventive use of continuity crossovers ) Marvel’s newest addition to their so-called ‘Cinematic Universe’ has arrived. Since Iron Man unexpectedly stole the thunder from household names such as Spiderman and DC Comics' Superman, Marvel were quick to realise that there is gold in their comic-book hinterlands, and now serve us the first instalment in what is Phase 3 of their comic-book film universe ( Phase 2 spanning Iron Man 3 to next years' Avengers: Age of Ultron ).

Once the cinematic Avengers and its spin-offs got established, many were caught off-guard by the choice for Marvel’s second super-team launch ( the Fantastic Four and X-Men still being handled – rather shakily - by other studios ). Guardians was originally a 'C'-list comic property, memorable for its whacky characters that, being set in the far future, wouldn’t trouble the continuity of the regular Marvel universe too much. This reviewer seems to dimly recall characters such as Starhawk ( who for some inexplicable reason, could switch from being a man to a woman ), and Nikki, a chick whose head was permanently on fire. Certainly, the abiding memory is that at the time, Marvel creatives were kicking back, and having a bit of fun. They were probably heavily stoned, too.

So, ten Marvel films in, does Guardians of the Galaxy bring anything new to the table?

The film is marked by its breezy use of sweetshop colours ( a fizzy purple and lime-green palette with just about every other part of the spectrum cranked up for good measure ), lending its alien characters, hardware, and most impressively, spaceships the look of a Roger Dean and Chris Foss fantasy art mash-up ( are these guys even on the payroll? – because they should be ).*

On the rare occasions you get to see an Earth-type planet, it's an architectural visualizer’s dream – all newly-built promenades and walkways drenched in sunshine that renders the whole thing a painterly vision of California Futuroid. So the film could get a pass on its visuals alone.

Admirably, Guardians gives us the fastest origin story in movie history, and after establishing that Peter Quill - AKA StarLord – is a hero with the obligatory parental-separation issues, we can get on with story at hand. Namely that he’s gone from 1980’s suburban earth-kid to intergalactic pirate within thirty seconds. Getting picked up by space police while on a scavenger hunt, he ends up in a criminal line-up, where he meets the rest of the ‘Dirty-Dozen-In-Space’ – forms the Guardians, and mayhem ensues.

Unfortunately, the brevity of the build-up does leave the audience grasping for a central thread by which to anchor the spectacle. Seeing the film with local writer and aficionado James Burr, we both exited the film thinking that there was something missing, but we couldn’t quite put our finger on it. ‘Maybe because it didn’t feel like there was a three-act structure..?’ my colleague pondered. It certainly felt more like a ‘middle-movie’, and perhaps that’s why the Empire Strikes Back similarities have been mooted on the internet. Unlike the landmark Star Wars sequel however, Guardians lacks any real emotional depth, therefore there is little corresponding investment in the characters’ story arcs. My friend also mentioned that the 3D – which he was seeing in a cinema for the first time – though impressive, was distracting, occasionally making him look at places away from the actual story-telling. Upshot: Stick with 2D.

Either way, we did feel a sense of anti-climax, as the publicity campaign had led us to expect a sharp Douglas Adams-style intergalactic romp. A bunch of characters pointlessly bickering between set-pieces, is not exactly Woody Allen and Diane Keaton. Hell, it’s not even Tony Stark and Pepper Potts.

There are, I suppose, many movie-goers who would appreciate being jacked straight into the story, with no messing about. And it would seem that the casting department contributed to this notion – they didn’t exactly stretch themselves, put it that way. Chris Pratt as a semi-loveable layabout? Check. Zoe Saldana as a feisty arse-kicking person-of-colour? Check. Michael Rooker as a shouty ( blue ) redneck? Check. ( Bradley Cooper as an annoying squirrel?...you get the picture. ) So it’s difficult to wrap your mind around what it is that director, former Troma schlock-trooper James Gunn, actually had to direct. ( ‘Don’t stand there, or you’ll get blown up...no, don’t stand there, either’ ).

Ironically, several elements do succeed where you don’t expect them to. Many of the humans still manage to bring out a performance despite being buried under layers of makeup and prosthetics, notably Dave Bautista as the amusingly literal Drax, while Groot the Tree Guy is a brilliant piece of animated pathos.

The marketing department certainly did their job, as the film is on track to score the biggest August opening in history. However, as far as the summer of 2014 goes, it’s not as good a superhero movie as Captain America: The Winter Soldier, nor does it pack the pathos or punch of Godzilla’s beautiful reboot. Ultimately, Guardians is a cheerful palate-cleansing confection to round off the summer, and the kids will love it. Those not used to a diet of Skittles and Cherry-ade, however, may feel like a detox is in order.

*14th January 2015: It looks like Future-Rocker's content droids should make more effort to crawl the end credits of movies. Apparently Chris Foss's art played an important part in getting the film green-lit, and Chris was also brought on board to contribute designs, as James Gunn explains at COMICBOOKMOVIE.COM . Apologies to all for the incorrect information!

KEEP SCROLLING FOR THE BEST ART & MUSIC FROM 2014