Future-Rocker caught up with Zardonic between recent gigs, to get the inside scoop on touring and album production.

''People go there to see Zardonic. And Zardonic they will hear'' 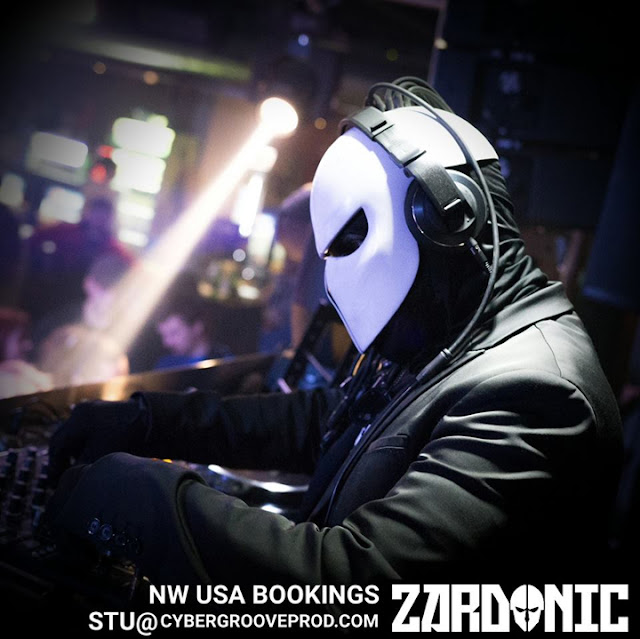 It takes some balls for a DJ to compose and record his own music and then DJ it at a gig. What was it like the first time you played your own tunes at an event?

It sure does, and Zardonic has BALLS OF STEEL!! Nukemisms aside, it was interesting! Especially because when I started, I was still on that trial and error process any self-taught artist and engineer has. Monitors? I barely had some Maxell headphones and some Hi-Fi speakers. With enough time and practice, I mastered my own sound, but you don't expect to have a club-ready mix with your first few tracks. I think the very first time I played my own tunes was at some house party in the middle of nowhere. And I remember being extremely excited about it. All I wanted was to play. I didn't care about any of the business side of it. Just me playing shit out of Traktor v 2.0 on my old ass Pentium D computer. Oh, did I mention I didn't have a laptop? Yep. Me, my computer monitor, my PC tower, some old ass keyboard and mouse. No fancy stuff. Just me and my passion and nothing in between. Good old days!

What do you do onstage to your own tunes to make them different from just playing the CD as it is?

I've started to add little toys to my setup to make it all more fun and interesting. I don't really use the sync button either, as convenient as that might be, but might have to start doing so, if I want to do what I want to do - which is having a semi-live act so to say. That's why it's so easy for a lot of DJs to play four decks and market themselves as veterans. It's all in the sync button. And I'm not against it. People need to understand that being a DJ is exactly that. It doesn't make them better or worse than the next musician. It's simply a different art and a different delivery. Go ahead and get on stage and do the same shit and see if you can do it any better. And whoever knows how to do it and can deliver a powerful result whatever the method, that's perfect in my book. I don't think the main stage at Tomorrowland would benefit from having Zakk Wylde playing the guitar instead, the same way Wacken wouldn't benefit from having Calvin Harris on it. Or would it? Zardonic ft. Zakk Wylde. Hmm. I like the sound of that.

Describe the composing and recording process for the album.

Lots, lots, lots, lots, and lots of experimentation. And then some. Until I have gigabytes worth of sample-packs I designed on my own. Then I choose whatever inspires me from there, and that works as the main spark for an entire tune. "Pure Power", for example, the intro loop, that was pretty much where the song was born from. Everything else derived from there. "Raise Hell", the first guitar riff you hear. "Antihero", the bleeping loop. I try to find a midpoint between the composition ethos of an EDM producer and a Metal composer. It all starts with a loop, and then I add enough variations and things to it, so it maintains that human touch most dance music has been lacking for a long, long time.

Planning for every single crowd you play for is not something I exactly agree with. I'm not a DJ that plays what people like. People go there to see Zardonic. And Zardonic they will hear. I think that's part of the misconception of a DJ these days. I was talking to Savant about it the other day, I remember him and his manager Josh saying "Fuck being a DJ". Best quote ever right there. What we obviously mean is not to ditch the CDJs or the turntables if you will, we simply mean fuck being what people think a DJ should be. We are artists. We play our shit, we play what we like and you follow or leave. I've never cleared a single dancefloor in my entire career. I've played Electro at Drum & Bass shows, Hardcore at House festivals, you name it. It's just me and I go with the flow. Eventually you do know that some people like certain things, others like other things. Russians LOVE their hard music but don't like Hard Techno, for example. Venezuelans love it. Florida is all about the four-to-the-floor, so my Industrial Electro works better there. Holland is all about crossbreed. Atlanta is more about trap and dubstep and whatever. That doesn't mean I haven't played Hard Techno for the Russians or Electro for the Polish. And again, not a simple complaint. It makes perfect sense. If you keep the crowd grabbed by the balls at all times, there's no time for them to rest, then you burn them, and I don't mean that in a good way. If there's something I've learned in 11 years of career is that people also like to listen to music, not only dance to it, and are more appreciative of an interesting set than a bunch of drops one after another.

Any chance of a full DJ set being released on CD, such as the excellent Moscow World of Drum and Bass gig..? - You should definitely sample that Russian announcer saying ''ZAARRRDONNNNNNIIIIICCCCC'' for a future song!

AGREED!!! Dude, I fucking love those voices. They use them all over Russia. I might actually do that for next time. I'll hit them up about it! I would love for a full set to be released on CD, who knows man! That's a great idea right there for sure!