''it's within the reach of anyone willing to put in the hours, which are very antisocial''

I first heard of them back in September 2000’s edition of Creative Review, when the four members ( Chris Harding, Gideon Baws, Richard Kenworthy, and Jason Groves ) were living and working from their flat in Muswell Hill. In the short space of time from having left the Kent Institute of Art and Design, Shynola seemed to have made a name for themselves with a notable and eclectic client-list, featuring everything from NatWest Bank to rock 'national treasure' Radiohead.

FR: Chris, I can state from experience that living with your student mates after college doesn’t always turn out as planned - how did you manage to make it work long enough to establish yourselves?

I know what you're saying! Living and working in each other's pockets can be tough. As to how it worked for us, I have two parts to the answer - we met at art college in the mid-90's and soon realised we were very like-minded. When we started “working” as Shynola, we had already spent around five years collaborating on student films, paintings, poetry, music and so on. Most things we produced in those days were dreadful, but it taught us a lot about getting the best from each other, not being precious and just getting things done. So, it wasn't as quick a rise as it probably seemed, not that I realised anyone was paying attention!
I can't give a definitive description of how we achieved what we did. I think it was just a combination of good luck and hard work. I don't mean any false modesty – I'm incredibly proud of the work we've produced – but I do think it's within the reach of anyone willing to put in the hours, which are very antisocial.

After starting out as a tightly-knit foursome - how many people work for Shynola now? Is it just the three remaining members ( Gideon Baws sadly passed away in 2008, at the age of 33 ), or do you have a larger staff?

Still just the three of us. For one thing, no-one could ever replace Gideon. And for another, we never wanted to become a company with staff. We hand-craft every piece of work between the 3 of us, within reason. We obviously need a crew if we're doing a live action shoot, and over the years we have met people we like to go back to, but our goal was never to become a production line.  It's a decision that's paid dividends in terms of artistic satisfaction, but we're every so slightly beginning to regret it as our families continue to grow and mouths need to be fed! 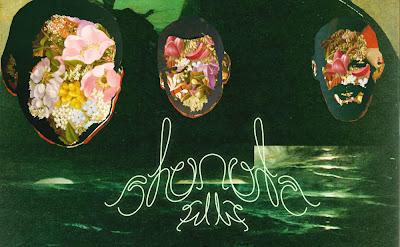 Tell us about your amazing new Science Fiction short, Dr. Easy. How did you discover the source material?

Matthew De Abaitua heard through a mutual friend that we were looking for a project to turn into a feature film, so he sent us the manuscript for his book, The Red Men, which was about to be published. I hope he won't mind me saying that when someone sends you their writing to consider adapting for film, there is a certain reluctance because if you don't like it then there's an awkward conversation ahead. So we left it for a while, fearing the worst.

As it turned out, we read it, loved it, and immediately bought the rights to adapt it and started writing a screenplay. The screenplay writing was slow. It took us about four years, being totally inexperienced in the field, and when we had it to a level where we weren't embarrassed to show it, we took it to Warp Films. Warp were into it and took it to Film 4, who also saw the potential.

Dr. Easy is a beautifully-made piece, reminiscent of recent urban sci-fi like the excellent District 9 and Dredd movies. What was the intention in doing a short film? To get interest for a full-blown movie?

Thank you, those are kind words indeed. Being music video directors, Film 4 wanted us to make a short film as a little test of our abilities. So, that's the long winded way of saying Dr Easy is the first chapter of the book The Red Men.
But just to elaborate a bit, our intention was originally to make The Red Men into a feature film. Dr. Easy served not only as a dry run, but to get interest in the larger project, The Red Men.

Explain the reason to use Jellyfish Pictures for the visual effects. Was it not possible to do it in-house?

We simply don't have the manpower or abilities to do what Jellyfish Pictures did on Dr. Easy. We contemplated the idea of doing it ourselves, looking for artists to come in and help us, but I think if we'd done it that way we'd still be animating now.

Certainly those were our influences in the early days, and those things still hang heavy in our heads and in our work, but these days we take influence from a far more diverse range of sources, from every day life with our families, to films and not least from things we see on the internet.

Hopefully more film making. We have built up a head of steam with Dr. Easy, and are just entering a new development phase on Red Men with eyes on actually getting it made ASAP.  As well as that, we will likely always be making music videos and commercials because sometimes it’s fun to work on something that turns around in a matter of months, not years.


To be frank, I haven't done an interview for quite some time, and it's quite pleasant to think your work has excited someone enough to get them thinking and asking questions about it!
Posted by HAL 9000 at 15:30