YOU THOUGHT IT WAS LADY GAGA, DIDN'T YOU?

It's 2020, which really sounds like we are living in the future now. In order to celebrate, let's enjoy this fantastic 1982 cut from MISSING PERSONS. Formed in 1980, it could be argued that the band were four decades ahead of their time.

Assembled around the main axis of Dale and Terry Bozzio ( singer and drummer respectively, who both met while working with prog legend Frank Zappa ), plus guitarist Warren Cuccurullo, Missing Persons had a strong following in LA, San Francisco and New York.

While much that was designated 'New Wave' came from art school cooperatives and avant-garde projects ( see Simon Reynold's magnificent book Rip It Up and Start Again ), the band were noted for having musicians with serious session-level chops.

Perhaps they were a band that never quite fitted in: They were too New Wave for the rock crowd, and too rock for the New Wave crowd, nevertheless, with some cool videos at the beginning of the groundbreaking MTV era, and Dale's distinctly risque presence, they notched up several Top 40 singles and a gold album in the US, before internal band strife and record company dissatisfaction caused the band to ultimately fizzle out.

Below: Dale in a classic CREEM centrefold, photographed by 80s legend Neil Zlozower. 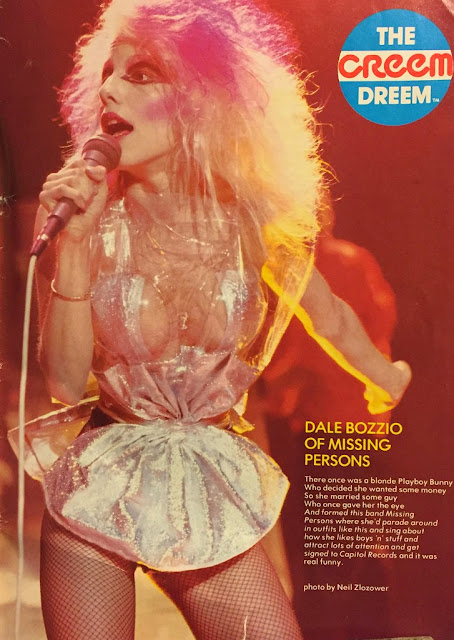 Guitarist Cuccurullo went on to enjoy several hits in his fifteen-year career with Duran Duran, and has since released many solo albums ( as have other Missing Persons members ), while also curating several re-release and remix albums of his old band.

Here at Future-Rocker, we think Missing Persons should be given credit for their brief flash of brilliance, even though they were the wrong band at the wrong time. Now, in the era of Gaga and her followers, we can properly appreciate them.