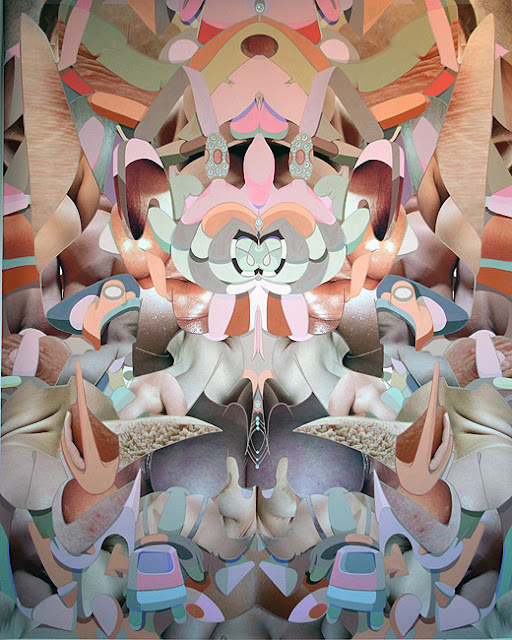 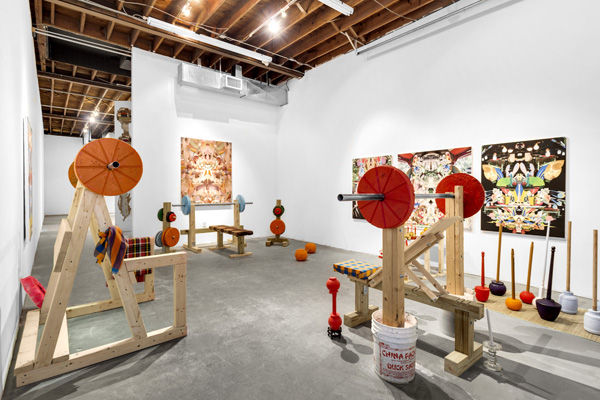 Toby Barnes is an artist that I met when we were both taking part in a show in Tokyo, called Psionic Distortion. Staying at the Andon Ryokan, a well-known artist's hotel, I seem to recall that we spent the entire week getting horribly lost, partly due to the friendly and well-meaning locals - who obviously had no idea what these bewildered and confused Westerners were asking - and so they repeatedly sent us on wild goose chases to spare us any further humiliation. Our exhibition was specifically curated around the Asian influences in our work, and with that in mind, I thought it would be apt to catch up with fellow-traveller Toby, and feature his work in this edition of Future-Rocker. Here, we present pictures from Toby’s Locust Projects Miami show - a mixture of artworks and installations - entitled Body Electric. The exhibition references the artist’s teenage years in North Miami, where he and his friends would fashion homemade weights made out of found objects such as cement and pipes, with different weights being used to exercise specific muscle groups.

Toby, what's your background? Am I right in thinking your dad was in the military?

I'm Thai American.  My dad is from Midwest and my mom is from Thailand.  My dad dodged the draft as long as he could, and then eventually got drafted but ended up in Thailand.  He returned to Thailand after his service when he joined the Peace Corps, and that's when he met my mother who was working in the malaria labs.  They later settled in Miami where I was born and raised.

How do the places you have lived, inform your art?

I grew up mostly in Miami, but spent summers alternating between the Midwest and Asia, specifically Thailand.  My last show "The Pull of Things", at Volta NYC 2017 best explains how these places and travels inform my art.  It’s part of my method, and also provides the visual triggers that you see in it.  My paintings are like kaleidoscopic Rorschachs, mixing and blending images that I've drawn from both my travels in Asia, India, and South America, and images from my everyday life in the US.

Knowing that our interests must coincide somewhat ( from having been in Psionic Distortion ), out of books, music, movies and comic-books which do you most enjoy, and which ones manifest in your art?

All of the above.  I love reading about mythology and world religions, and the visual language of mythology is how I get inspired.  For instance, the multiple heads and hands in Indian mythology, or hybrid figures like the Minotaur.  I love composites and figures that transform themselves.

Below: Body Electric, artworks and installations by Toby Barnes, at Locust Projects, Miami. 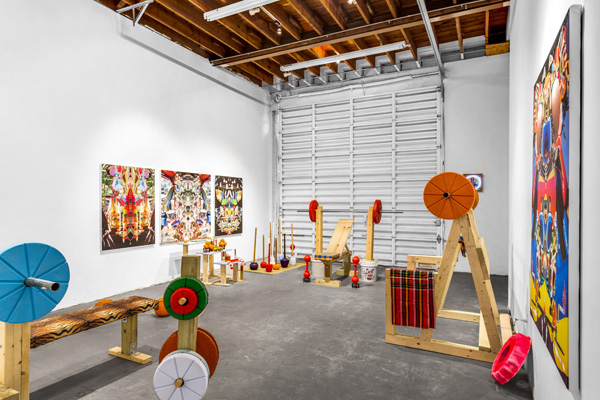 Looking at your collages, is it all made from found media, or do you photograph or draw some elements, too?

My collages are mixed-media, but on a sliding scale: I don't want to be fixed into any approach imposed by any given, singular media.  So I use collage to mix digital photography, drawing and painting, but the extent of each one varies according to the work.

Below: Center Body, by Toby Barnes. 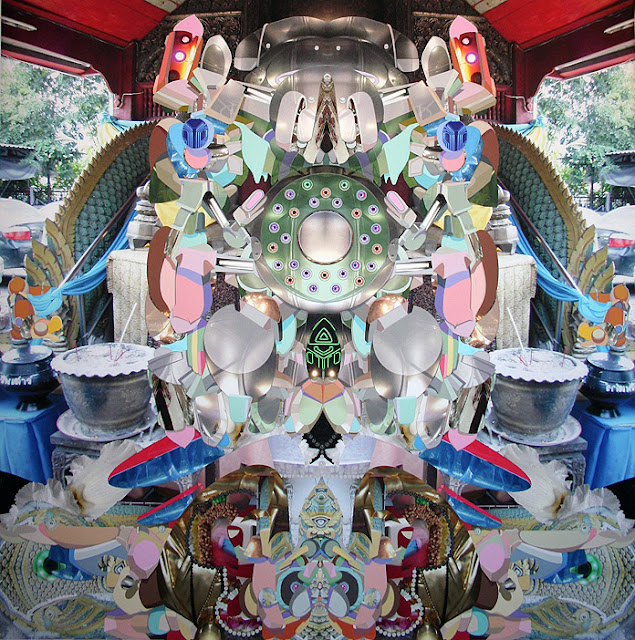 What exactly is the process?

Every medium has their limitation but I've allowed myself to have freedom to expand, combine, and push the boundaries of what constitutes a particular media.  The focus of my challenge has been paintings, and I've sought to expand on what we understand by them.  In the beginning, I used to leave the medium of painting by turning to another medium, such as installation art or silk screening, and then come back to painting with a new approach.  Now I develop my approach from within painting. 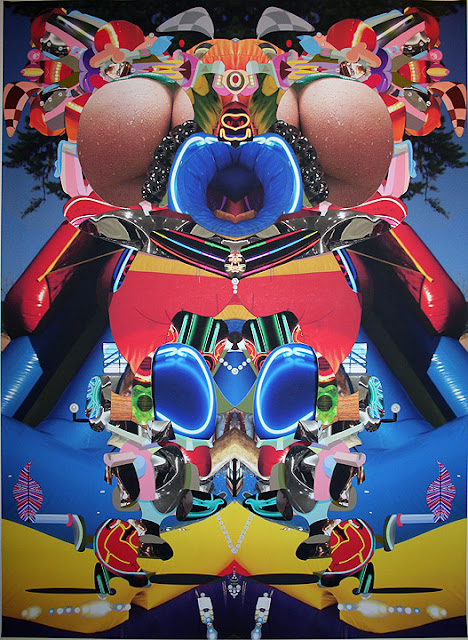 What are you working on right now?

I just finished a show this past month ("The Pull of Things", Volta NYC), and now I'm stepping back and thinking about the intersection of collage and painting.  I want to continue the investigation into the aesthetics of the painted surface.

Below: Shower With Flowers, by Toby Barnes. 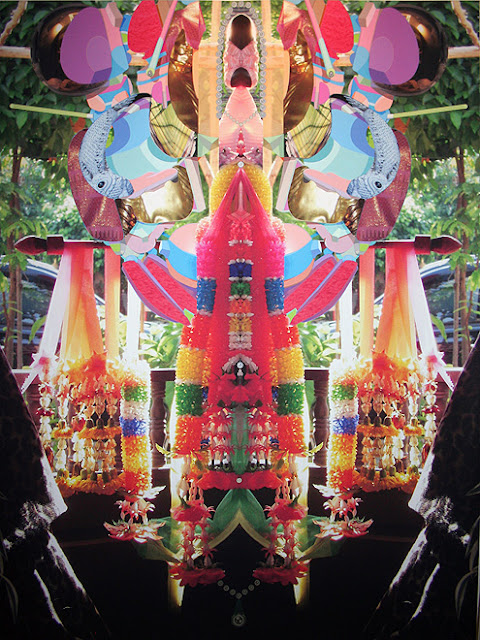 hat's the art scene like in Amherst, New York, where you live?

It's a college town, and actually this is the Five College area, so there are five around which gives me amazing access to exhibitions and talks.  I've loved recent exhibits at UMASS Amherst, including an ongoing one now by Kara Walker called "Emancipating the Past."  I'm also vibed from being in constant contact with academics across various disciplines.

Below: Salchi Papa, by Toby Barnes. 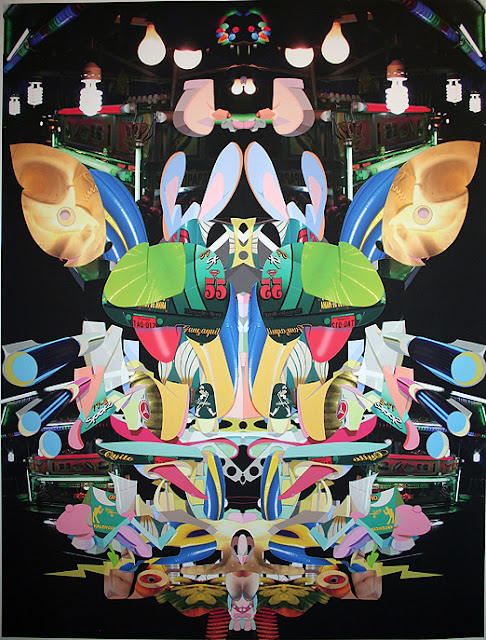