NEWS ON OBSYDIANS, THEIR NEW VOCALISTS, AND SAMAEL!

As you may know from reading Future-Rocker's comprehensive interview with Thomas back in early 2016, the cyber-metal juggernaut that was SYBREED is no more. Ironically, interest in the band has grown since its cessation, due to an ever-growing army of admirers on Youtube, and no doubt aided by the French singer Rachel Aspe's herculean cover-version of one of Sybreed's best-known songs ( 'Emma-0' from 'Antares' which she did on the popular TV show France Has Got Talent ). It's clear that large numbers of people still listen to the back-catalogue.

With the vocalist Benjamin Nominet leaving for personal reasons, Thomas felt the focal point of the band went with him, and so decided to close the chapter on Sybreed, and build a new, updated-model, called OBSYDIANS. Retaining Sybreed's core musicians ( alongside Thomas, there is also Ales Campanelli on bass, and Kevin Choiral on drums ) Obsydians is apparently going to be very similar to the classic sound of 'Antares', with a notable exception: There will be three vocalists!

We will let Thomas pick up from where we left off last year...

Drop: We are not in the studio at the moment, but things have moved forward a bit. We’ve finished 3 demos, and as we speak the singers are hard at work on them. We have Jon Howard from Threat Signal, Steve Fari from This Misery Garden, and Guillaume Bideau from One Way Mirror.

For those of you unfamiliar with the different vocalists and their respective bands, we have included clips below. We're pretty excited, because none of them are run-of-the-mill choices. Thomas is obviously a man of singular vision, and knows that each will compliment his writing and producing.

Future-Rocker: That is a stellar collection of singers for one band. They will definitely all be able to fit the original Sybreed blueprint and bring something completely new for Obsydians. How long will we have to wait until we hear a new track?

Drop: As soon as we have all the vocals and music, we’ll record everything and make the final versions. I really hope to be able to release one of these songs before the summer! But you know how tricky schedules are, even more when you work with people living in different parts of the globe. ( - Threat Signal are from Canada, This Misery Garden are Swiss, and One-Way Mirror are French. ) In the meantime we’ll finish some more demos, we have approximatively 8 more songs to be finished. ( Continued ).

Below: Thomas 'Drop' Betrisey playing bass on tour with SAMAEL. 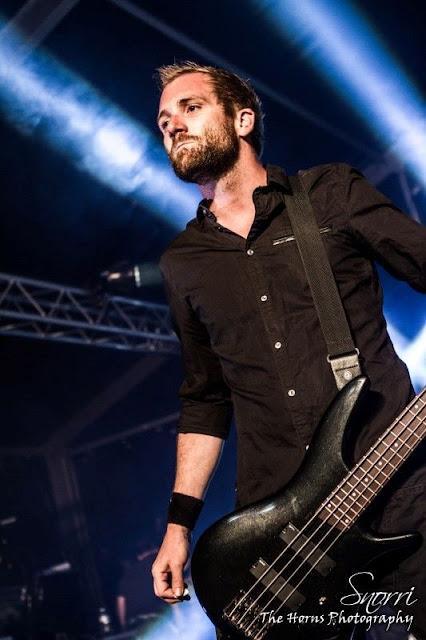 Drop: Obsydians is not really a live band. If we’ll have to play some shows, I will surely ask only one singer to sing for them all.

Here at Future-Rocker we suspect that summer festival dates will be the most likely place to witness an Obsydians performance. You never know, more than one vocalist could be available if his other band is also playing on the same bill.

When we last checked-in with Drop, he was sitting under a palm tree in Mexico, telling us about achieving his teenage dream of joining his favourite band, Swiss industrialists SAMAEL. Shortly after that, he was delighted to be joining his new bandmates on the 2016 '70,000 Tons of Metal Tour', a yearly metal festival that navigates the Caribbean aboard a cruise-ship.

The 70,000 Tons was amazing man. Really cool times, met a lot of nice people. Smoked some green in Jamaica, all good...I really hope we can go back to perform on that "boat" soon.

So you're still with Samael?

For sure I’m still with Samael. We just signed a deal with Napalm Records, and we are gonna release the new album later this year.

With the intense sound of Sybreed, and also in your guise as producer-for-hire for bands such as Clawerfield, Nakaruga and This Misery Garden, has it ever been suggested that you produce a Samael album?

Haha, the producer and mastermind of Samael is Xy, and I think he does this job really well. So the future will tell what’s gonna happen production-wise.

Cool. Any other big festival tours lined up for Samael?

We have confirmed California Deathfest on October 14th 2017, and we hope that some dates in the US will follow.

Thanks for the update, Drop. A lot of fans will be very happy to know that you've got some new music coming out this year.